Showing posts from December, 2016
Show all

What a Week! Christmas has come and gone, and as we reflect back on 2016, we are humbled and amazed! Before highlighting back, let's just look at the 5 days since waking up Christmas morning.
After opening presents to one and other, Julie opened her email to discover that she had been featured in an article "20 Fabulous Tree Pictures " by Gurushots – the competition site that they both compete on.

By Wednesday, Bob was working his magic in a competition on the site for "Inspiring Architecture". Suffice it to say that it was a long night and by the wee hours Thursday morning, Bob was in 1st place. Over 4900 photographers competing with almost 18,000 photos boiled down, as he had predicted, to a photo finish (Pun intended).
Bob won his 1st international photo competition by 15 votes!

It's always a good day when you get notified that your work is appreciated.  As a photographer, outside of getting that order for mulitple large prints, that day usually occurs when we get an email informing us that we have either been chosen to have our work on display in an exhibition, or featured in an article.
When that happens on Christmas day, you can't help but feel a little better yet!  Julie Everhart was pleased to get that email about an article from Gurushots on Christmas Day!  No, not the big print order or the exhibition notification.  Click the following link or the photo to see the entire article.  It truly will inspire you!
20 Fabulous Tree Pictures- To Inspire You To Grab Your Camera And Head For The Woods

Frozen in time
This infrared photo, taken near her home, has been one of her most favored photos.  When it is selected by one of the largest photo competition sites in the world as the #2 featured photo, that is something special.  Congratulations Julie!
Now,…
Post a Comment
Read more

Impromptu Photo Shoot and a Bunch of Rocks 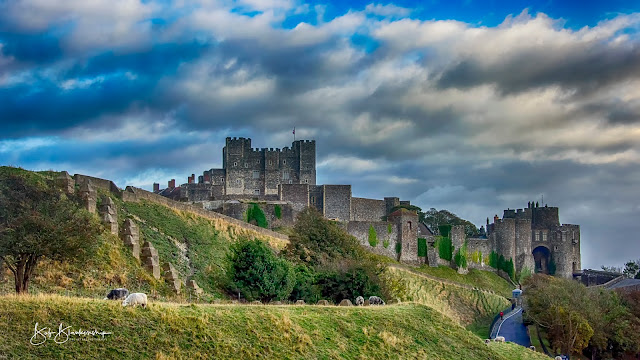 After our day in Dover, we headed West.  Before leaving town, we had to stop for one last series of shots that would be somewhat of a hallmark practice of our trip.  You would think after all the walking, we would be ready to just drop and sleep (especially after the jet-lag had set in).  Instead, we stopped at the Dover Castle!


After completing our shoot, we did load up and head West, arriving late in Crawley, just South of the Gatwick Airport.  A wonderful B&B, The Oakhurst provided us a warm welcome, wonderful accommodations, and a very good nights sleep!  We woke up and prepared for our breakfast - the traditional Full English - and were again refueled and ready for a full day on the go!  Great job Jon!

Before taking off, we found ourselves fully engaged in an impromptu photo shoot with two wonderful models!  A mother and daughter team, these two were too beautiful to ignore!


Of course, we came with different intentions, so we finally said our good byes and continued West.  A…
Post a Comment
Read more
More posts

Check out my designs on Zazzle

From Camera to Wall

If you appreciate the information in this blog or would like to just help a photographer to make ends meet, know that your donations are appreciated. Thank you!